Home About the company Blog What is going on with Meta Inc. and how to profit from its fall?

What is going on with Meta Inc. and how to profit from its fall? 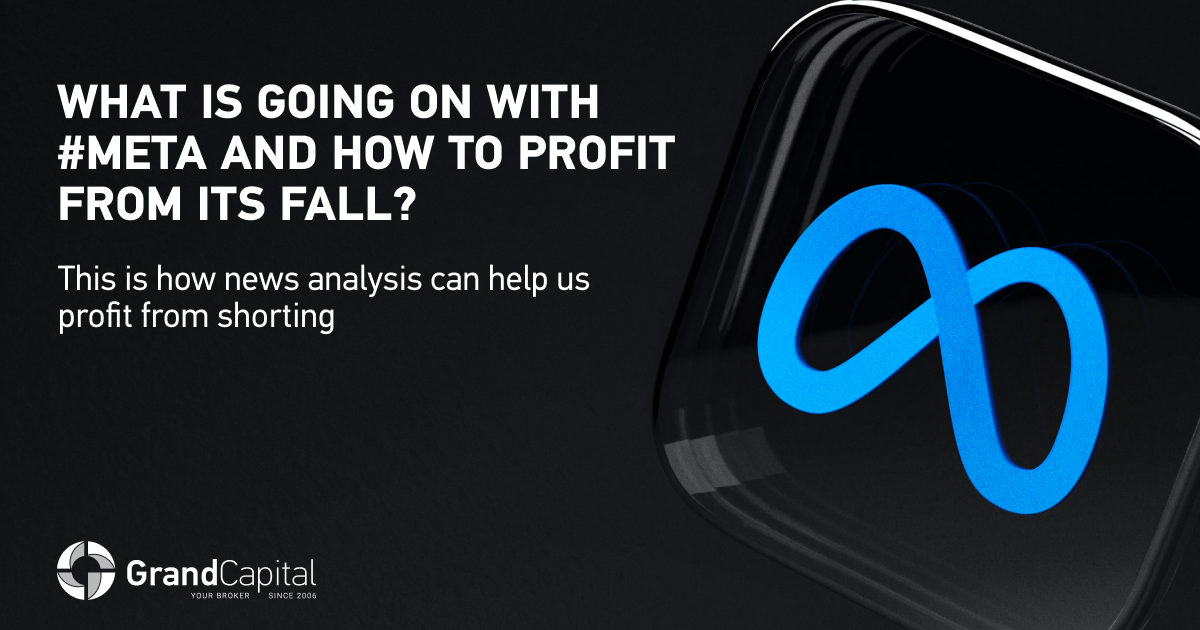 Meta Inc. is an American technology company that stands behind Facebook, WhatsApp, Instagram, and many other platforms and services. A year ago, in October 2021, CEO Mark Zuckerberg announced a renaming of the parent company, Facebook Inc., when the share prices were higher than $340 per share.

Ever since, Meta’s business has been far from perfect. In 2022, it experienced a huge drawdown and its shares lost 3 times in their value. Why has it happened, what is the future of FB stock, and how can traders use this situation for profits?

Meta fails because of economic slowdown and ad disinvestment

In 2022, the world economies are facing historic levels of record-breaking inflation. Inflation is an echo of many factors combined: the remaining COVID-19 outbreaks, the estate crisis in China, the Russia-Ukraine conflict, disruption of supply chains.

The central banks tighten their policy to hold inflation in check and raise interest rates. At the moment, the Fed has raised the rates four times. The result is the strengthening of the US dollar and weakening of national currencies around the world (the UK pound, the euro, China’s yuan and Japan’s yen). Importing goods becomes more expensive for such countries, and prices rise.

How do businesses react to the global economic slowdown and rising prices? They cut costs.

On the Y1 timeframe, we see that all US technology companies have a negative price trend.

Meta Inc. is one of the most influential advertisers. Ads generate more than 90% of the company’s income. The market trend of ad disinvestment could not but influence Facebook and its parent Meta Inc. dramatically.

The clear case of Meta’s dependency on ads was in 2021 when Apple updated iOS and added a tracking transparency update. Apple made it impossible for ad services like Facebook to track users properly and target advertising campaigns. According to CNBC, it would influence the earning report by a $10 billion loss in 2022.

Meta fails because of refocusing on VR technologies and Metaverse

To get over the authority of Google and Apple, developers of two titanic mobile operation systems, Facebook reimagined its business objectives. The company renaming implied that now Meta Inc. would revolutionize the VR industry and introduce many new users to it with the metaverse project.

The metaverse disappointed the audiences and investors provoking a big wave of online criticism. Many find it to be a mistake, to invest in the Facebook metaverse, when the company faces problems with what it does best (i.e. ads revenue).

According to Business Insider, Meta Inc. has invested more than $9 billion in the project. The project, the Verge claims, is not actively used by Meta’s employees. The outcome – Mr Zuckerberg follows the VR course but Facebook's share price goes down.

Since autumn 2021, the stock prices for #FACEBOOK have been gradually declining, losing 300% in its value.

Ex-Facebook is now called “the worst performer in the S&P 500 this year” (CNBC) and “the second most profitable stock for short sellers” following Musk’s Tesla (Benzinga Pro). When we look at the chart, we see a bearish trend for Meta. Is Meta a buy right now? Definitely no.

The future of the Meta will partly decide the staff layoff announced for the upcoming week. It is going to be a historic moment for the company. The number of the fired will be higher than ever before. So, the question ”How much money did Meta lose?” better be paraphrased into “How much more money can Meta lose in the future?”

How to profit from Meta Inc. drawdown?

In short, to profit from Meta Inc. now, we can trade short positions.

A short trade, or a sell position, is a type of deal that brings profits from asset depreciation.

Traders sell the assets, which a broker owns, and rely on its future price drop. That way traders hope to buy out the same amount of assets to pay back their broker and keep the profit from a difference in prices.

Trading short also goes under the name of “naked shorting”, for traders sell the assets they don’t own.  It is a part that frightens most of the traders who usually trade long. But they should try shorting, too. And here is how to do it following the recommendation of our trading expert:

Sell on the formation of a descending wave structure.

Stop Loss for the local maximum of the ascending structure (97.40).

Trade #FACEBOOK in our WebTrader terminal now and profit from the best stock for shorting 2022!

Author: GC
Back to all articles Back

Thank you for subscribing to our analytics

Thank you for subscribing to our analytics